Up until very recently, I was quite leery of Reddit. Although I knew a few fervent (even evangelical) users, most of my knowledge of the platform was informed by its controversies. There is no doubt that Reddit used to (and to an extent still does) play host some of the darkest corners of the internet. Its demographics are still distinctly male and white. Yet I am writing as something of a convert. This is partly because I hadn’t realised just how self-defined Reddit-based communities often are: for every cesspit of racism and misogyny, there are other spaces that are welcoming and inclusive. For another, it’s popular: it recently overtook Twitter in terms of active users. What led me to become an active user, however, was a particular community: AskHistorians. 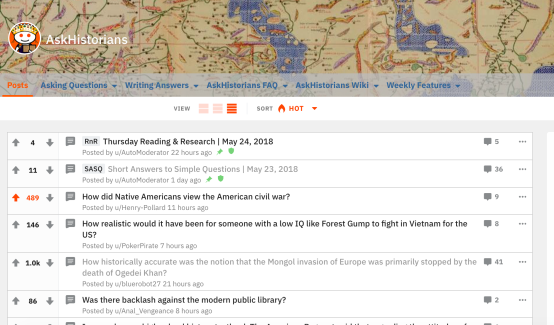 Its premise is simple enough. Anyone can ask a question about the past (nothing more recent than 20 years ago, with the exception of historiography). If your question is a good one, it will generally eventually be answered by a historian. Any answer not meeting the stringent quality criteria is ruthlessly pruned (the severity of moderation is a running joke, although it’s always impeccably polite). Answers should draw on primary and secondary sources, and should be written by someone with expertise in the subject area. Those with a track record of providing good answers are given ‘flairs’ to their name indicating their area of expertise, although anyone can offer an answer if they feel able.

The sort of questions that get asked are a mixed bunch – there is often a tendency towards dull military history (how many Panzer IVs would it take to change a lightbulb?), and problematic questions about subjects such as the Holocaust and American slavery are a bit too common, albeit ably dealt with. Yet there are many good questions, covering a very wide spectrum of history, and they often receive excellent answers. The platform tends to reinforce quality – interesting questions and answers can be upvoted and thereby receive higher visibility, while the community itself has various ways to highlight particularly good answers.

I was drawn into participating through their Twitter account, and eventually graduated from reading interesting-sounding answers to trying my hand at providing them. I found it to be a great deal of fun, for the same reason that I enjoy going to university research seminars – discussing and learning about history is something I enjoy. I’ve even found myself doing mini research projects about particularly interesting questions (a couple of weeks ago, for instance, someone asked about Salvador Dali’s relationship with fascism – a subject I had always meant to look into). Answering this kind of question has encouraged me to read more widely around my topic area, and experiment with a new style of writing, somewhere between blogging and formal academic-ese. To be sure, it also hasn’t hurt that I found myself with a bit of extra free time between submission and viva…

Aside from the fun of it, what has also struck me about the community was its sheer scale. Many of us use blogs or twitter to try to communicate our research to an audience of dozens, hundreds on a good day. AskHistorians has over 750,000 subscribers, of whom thousands are active at any one moment and are there explicitly to consume high quality historical scholarship. An interesting question and answer can pick up hundreds or thousands of views in a matter of hours. As something of an experiment, I asked a question about drugs and the Second World War that I suspected might get traction, and it managed to garner nearly 10,000 views in under 24 hours, an order of magnitude or so more than any research-based content I’ve written online. Especially for junior researchers struggling to get their research seen by a wider audience, this platform offers massive potential for visibility.

This is of course not an even opportunity. The demographics of Reddit seem to lend themselves to questions about US, European or military history, although more diverse (and interesting) subjects do come up regularly. More optimistically though, I think a community dedicated to providing solid, nuanced historical perspectives is nothing short of a public service in this context. Honest questions from those exposed to various forms of denialism get serious, patient and well-sourced responses. The misuse of history for present political needs is consistently and effectively challenged – such as a recent spate of posts about whether it’s historically accurate for an upcoming video game to portray female combatants in the Second World War.  These, as with similar queries about video games and race, have been rebutted forcefully and intelligently on a factual and conceptual level. Racism, sexism and other problematic behaviour is not tolerated.

There are other limitations to the platform from a selfish academic perspective. Post views are only available to moderators or the person who asked the question, making it hard to track metrics in the same way as Twitter or a blog. But overall, after a month or so of joining in, my main concern is whether I’m spending slightly too long on the site.